Bird Theatre! is an episode of 3rd & Bird from the first season.

Mr. Beakman is putting on a play, but there is no role fit for Muffin.

Smauel and Rudy are practising for Mr. Beakman's play, and Muffin spots them. After knowing what a play is, she wants to be in the play too. The three children go to the Bird Theatre to ask Mr. Beakman if there's a role fit for Muffin, but to Muffin's disappointment, he says he's already got all the actors he need. Just then, a storm comes. It blows all the props needed for the play (which are a cardboard hat, a cardboard potato, and a cardboard watering can) away. After the storm, Samuel and Muffin go to Mrs. Billingsley's to ask if she can lend them a hat, a potato, and a watering can to replace the lost props. But Mrs. Billingsley hears all the prop's names wrong, and can't understand what Samuel said. Muffin says what Samuel said again, this time pretendig she is the props as she says the names, so Mrs. Billingsley can understand better. When Muffin pretends to be a watering can, she is like one so much that Mrs. Billingsley thinks she is one. Samuel sees this, and gets an idea. When he and Muffin are back at the Bird Theatre, he tells the others that Muffin can be the props. This way, she can be in the show too. In the end, the play went very sucessful. 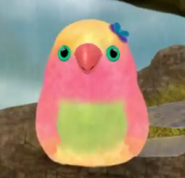