Elliot is a recurring character in 3rd & Bird, a green worm. He is voiced by Ethann Lewis.

Elliot is a worm and the only recurring character in 3rd & Bird that is not a bird of some kind.

Elliot is a light-green colour. He wears a grey-blue cap, similar to Quinn's. He has no arms or legs.

Elliot appears in many episodes of 3rd & Bird. He first appeared in Meet Elliot! and his final appearance was in the series finale, Aunt Esther!. 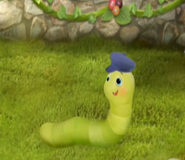 Elliot and other worms in Aunt Esther! 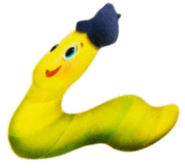 Elliot in an animated image

Elliot and Muffin in an animated image