Missy is a recurring character in 3rd & Bird, a great blue turaco. She is voiced by Charlotte Leslie-Cameron.

Missy is a bird from France with a very noticeable accent. She calls the three children (Samuel, Muffin, and Rudy) "little birds," a nickname that Samuel and Rudy strongly dislike. Missy is often seen preening.

"An exotic French bird who refers to Samuel and his friends as “little birds”."

Missy's feathers are mostly blue, except for her lower body, which is mostly tan-yellow. She has an orange beak, turquoise eyes and frizzy blue hair. Her feet are pinkish.

Missy appears in many episodes of 3rd & Bird. She first appeared in Fly Muffin! and her final appearance was in the series finale, Jamaica! (in which she makes a cameo appearance). 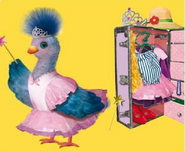 Missy and her closet

Missy in A Very Squooky Christmas!

Missy blowing away in Storm!