Mr. Beakman is a major character in 3rd & Bird, a middle-aged toucan. He is voiced by Michael Fenton-Stevens.

Mr. Beakman is the children's instructor, almost never found away from his schoolroom. He is very knowledgeable and often teaches the kids life lessons while not in class. Since his young students are rarely with their parents, he acts as the voice of parental authority in place. He is also a master whistler, one of the only traits of his that the children find "cool."

"Samuel’s toucan teacher who likes to show the birds lots of cool things – in one episode he delights in explaining what a mariachi band is, by singing a mariachi style song."

Mr. Beakman is never said to have a true house, and it is assumed that he lives inside his schoolhouse.

Mr. Beakman's feathers are black-and-white, except for an orange patch over each eye. He wears a blue sweater vest with a red bowtie. His feet are blue-coloured. 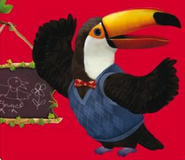 Mr. Beakman and his chalkboard

Mr. Beakman in Down to Earth!

Promotional art based on Ahoy!

Mr. Beakman in To Play or Not to Play!