Mr. Lovebird is a recurring character in 3rd & Bird, a multicolored lovebird. He is voiced by David Beckford.

Mr. Lovebird is the father of Samuel and Muffin. He cares for his children very much, though is not always around to watch over them.

"Samuel and Muffin’s parents who aren’t often seen but are always on hand to help out and support their children whenever the need arises!"

Mr. Lovebird's feathers are indigo, purple and white. His feet and beak are orange. He wears a pair of square glasses (though his original design did not include these). 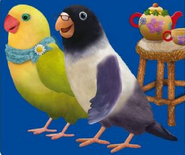