Muffin Lovebird is the deuteragonist of 3rd & Bird, a pink lovebird. She is voiced by Eden Jarrett.

Muffin is the youngest character seen in the series, and is incapable of doing many things that the older birds can do. She mispronounces the central characters' names, except on a few rare occasions. The series' first episode, Fly Muffin!, focuses on her attempting to fly. She cannot fly well, so she often rides on Samuel's back as a form of transportation. Muffin is often told that she is adorable and uses her appearance to an advantage, often whining when things do not go her way.

"Samuel’s cute little sister who is a pre-­schooler and hasn’t learnt to fly or speak properly yet, but she tries hard and always looks to her brother for advice. She is small and pink."

Muffin lives in the Lovebird house, located on a tree branch (like the rest of the buildings in the series).

Muffin's feathers are mostly light pink (with some orange on her wings). Her scalp and body are a light yellow colour (with some areas dark enough to look green), while her face and most of her wings are pink. She wears a blue bow on her head and her feet are pinkish. 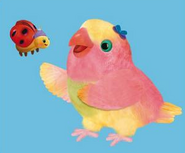 Muffin and the ladybird 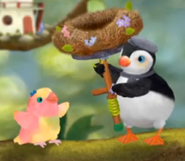 Muffin in Down to Earth!

Muffin in A Very Squooky Christmas! 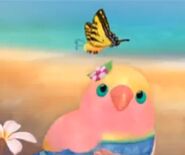 Muffin in an animated image