Rudy is the tritagonist of 3rd & Bird, a yellow-and-red cockatoo (most likely a cockatiel). She is voiced by Morgan Gayle.

Rudy is an extrovert, often showing off her talents (to the dismay of her introvert best friend Samuel). She is the first to try new things, and when things do not succeed, she tries again. Her persistence is not always positive; it sometimes leads to problems.

"Samuel’s best friend who likes to wear beads around her right ankle and always helps Samuel wherever she can. She is red and yellow."

Rudy lives in a red tractor-trailer located close to Samuel's house. It is located on a tree branch.

Rudy's body is covered in red feathers. Her head and tail are yellow, aside from her rosy red cheeks. She has spiked-up hair and green eyes. Unlike the other bird children, she wears a colourful bracelet on one of her orange feet.

Rudy appears in every episode of 3rd & Bird except Beach Branch!, Meow Kitty!, Scooter!, Help Daddy!, and Aunt Esther!. She first appeared in the unaired pilot (her first official appearance was in Fly Muffin!) and her final appearance was in the series finale, Jamaica! (in which she makes a cameo appearance).

Rudy in The Race!

Rudy in A Very Squooky Christmas!

Rudy in a Top One commercial 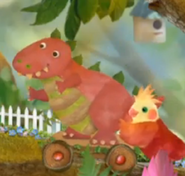 Rudy in an animated image 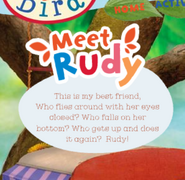