Samuel Lovebird is the protagonist of 3rd & Bird, a five-year-old green lovebird. He is voiced by Sam Lewis.

Samuel is dependable young bird who tries his best to show his younger sister, Muffin, how to be responsible in the outside world. He is Muffin's best role model, despite his occasional mistakes. Samuel can often be found at his best friend Rudy's trailer, where the two play traditional children's games such as marbles. Rudy is more outgoing than Samuel, who in comparison seems quite reserved.

"A five-­year old who always tries to plan things out but often needs the help of his friends when things go wrong. He is green and wears a blue hat."

Samuel lives in the Lovebird house, located on a tree branch (like the rest of the buildings in the series).

Samuel's feathers are mostly a bright green shade (with the tips of his wings a bluer hue). His chest and face are covered in peach-coloured feathers. His beak is bright red and his eyes are turquoise (with black pupils). Samuel's tail is blue, ending in a few black feathers. His feet, each with three talons, are a light lavender. 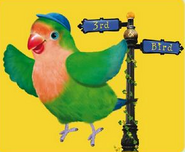 Samuel in the pilot

Samuel in A Very Squooky Christmas!

Samuel and Rudy in To Play or Not to Play!

Samuel and Rudy in Playhouse!

Samuel in an animated image

Samuel and Muffin in an animated image